If you have been following the last posts on this blog, you may have noticed that the screenshots had some kind of coherence. Well, here is where they originate from. 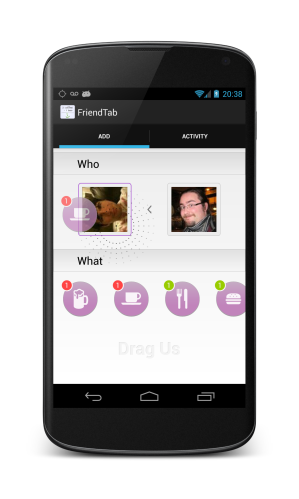 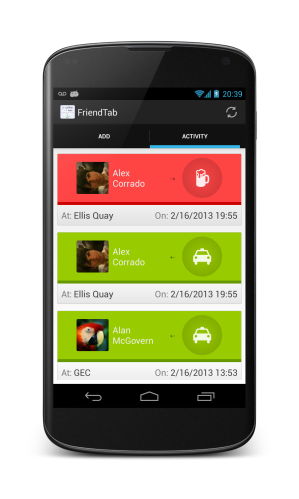 FriendTab is a simple Mono for Android application to help you track what you owe to your friends and what they owe you.

The idea is that you can select your friends directly from your contacts book and then simply drag a set of available items (coffee, beer, lunch, …) to remember what was given to you and, eventually, return the favor.

At the moment there is no scale between each element but it’s one of the planned feature so that you can define a relationship like 1 beer = 3 coffees as in the app icon.

FriendTab originates from a hackday project I did at Xamarin and has evolved from a basic app to something that allowed me to test a lot of different concepts and user interaction.

It also produced a set of code and techniques that were covered here and on Xamarin’s blog (list of resources further down).

Among FriendTab interesting traits we have:

FriendTab source code is hosted on GitHub under the terms of the Apache 2.0 license which essentially mean you are free to reuse whatever you want from it in your own apps.

You can find instructions on how to build, run and use the app in the README.

It’s also available on Google Play if you want to do a test drive (keep in mind it’s demo quality):

Here is a list of links to the developer tutorials/materials related to this app:

As a special mention, I would like to thank my buddy Jean-Paul who contribued a lot of the UX and beta tested the app.

Also, don’t forget Xamarin is soon holding its first Evolve developer conference in Austin, TX where you can attend talks/training sessions on Android development and, in addition, meet with the whole Xamarin team if you have any questions. 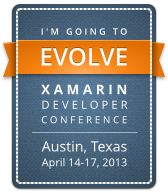